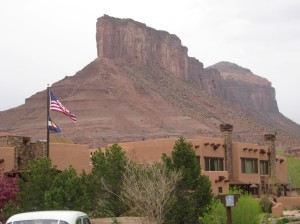 In beautiful Gateway Canyon, Co, at the wonderful banquet they put on for us, Jerry announced that two Chinese teams would be joining the World Race in Beijing. Now here’s the thing. We don’t have any names, (not that we would be able to pronounce them anyway) and we don’t know if they are driving Schuster class or Innovative class cars. I am sure there are Chinese who collect antique cars and Current Event publication recently reported that “China’s Ministry of Industry and Information Technology is preparing a 10-year plan aimed at turning China into the world’s leader in developing battery-powered cars and hybrids.”, so their interest in the Innovative Class is a given.  We will just have to wait and see who and what awaits us in China.

Wen and Orin, the Chinese team, who drove a 1958 Hongqi- China’s oldest production car- modified with an energy-efficient engine, certainly caused Ed Talbot a great deal of trouble, but that was in The Long Road to Paris and Ed Talbot isn’t real and neither are Wen and Orin. And the problems they caused were purely figments of our over-active imaginations! This is real life and we welcome our entries from Asia and Europe.

We do know that Klaus and Maja von Deylen, from Germany are real. And their fun and friendly. We’ve rallied with them before.  This time they are driving their beautiful 1957 Mercedes-Benz 22o S. in the Schuster class, meeting us in Latvia.  It will be good to have them along, partly for very selfish reasons. Both Mary and I will welcome another woman by this point. Anything to keep all the men civilized. And, Klaus drove a Type 1 Beetle in the Peking to Paris race. I don’t remember which year. But he know a lot about air-cooled engines. He’s put one to the test. So, if we need help……well, we know he’s a sportsman.

Maja, Klaus and Ed in Koln

So, we count down the days until we leave for China.-26. Still much to do. Order some additional spare parts, buy a new cell phone, visit with friends and family, re-pack and lots of daily chores-mow the lawn, water plants, you know the routine…

See you again, on the sure to be exciting road to Paris,

Authors and adventurers, participated in the World Race 2011, an automobile rally from New York to Paris, crossing three continents and 14,000 land miles. Following much the same route as the setting for our debut novel, The Long Road to Paris. This blog describes our own adventures and challenges. And now you can follow our Bahamas sailing adventure that provides the setting for our second novel, Night Watch. Our rally, the African Safari Challenge, crossed five countries in South Africa in May 2014 and in 2015 we participated in the second Trans-American rally this time from Nova Scotia to San Francisco. Spring of 2016 we travelled 28 days around Australia with friends from previous rallies and in the fall participated in our most exhausting rally through Argentina, Chili and Peru- the Rally of the Incas. We were awarded the Against All Odds award. We're still not sure if this was for us or our car. Stewball never broke down and we hardly did. We will soon take on Iceland as a self-drive tour and in the fall of 2017 we will participate in the Odyssey Italia and then back to Africa for a do-over (almost) of the Africa Safari Challenge.
View all posts by ejhowle23 →
This entry was posted in Uncategorized. Bookmark the permalink.