Nov. 29. Day 17. It’s been days since I’ve posted. Thanksgiving has come and gone while we crossed  borders We have crossed the border to Chile, back to Argentina and back again to Chile.

Our days have been long and many of them hot. By the time we get into our hotel, there has been no time for anything except a shower, dinner and bed. However we have a day off and I hope to give you a flavor of our last days.

Andes and the border at Paso Jama. This is the most northerly border between Argentina and Chile and reaches a height of 15,000 feet. The road still rises after that to 15,764 feet (according to my Garmin). Yes, this is a part of  our ascent. We had concerns about ourselves and Stewball. We crossed here with a few other cars, but the rally route crossed at a lower altitude on a road that is partly gravel, our route was a longer and higher, but with better road conditions. Fuel was a problem, but fortunately we did locate a fuel station along the way.  (Some of the rally cars did not make it and had to be towed to a station at the end of the day.)

Bottom line, Stewball did experience some vapor lock but never let us down. We did take some puffs of oxygen we had brought along and experienced a few symptoms of altitude sickness, namely, headaches and muscle weakness when we were out of the car at the border and had to exert ourselves walking into the border control. By the time we got to our hotel we had entered the desert, passed the famous salt flats and

descended to 9,700 feet. We were ready to collapse and give Stewball a much needed rest. This is the highest point on the rally and while we will be at 10,00 feet in Cusco, we are confident we will make that without difficulty. 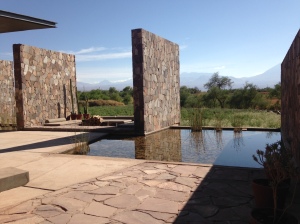 Our hotel, Tierra Atacama is the best so far on the rally. We are in the Atacama Desert with volcanos in the distance. The views are spectacular as they were on most of the drive here. Nights get quite cold and days are hot. 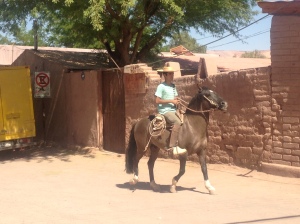 This morning I had the opportunity to walk into the dusty town of San Pedro de Atacama with Marian, a rally friends from Australia to buy a few things. This is a popular tourist destination for serious hikers, photographers and adventure

tourists. Tonight the hotel will put on a Chilean barbecue with lamb and live music. I’m looking forward to that. A great end to a wonderful break.

Tomorrow we are  on the road again traveling along the coastline of Chile almost to the border of Peru.

Authors and adventurers, participated in the World Race 2011, an automobile rally from New York to Paris, crossing three continents and 14,000 land miles. Following much the same route as the setting for our debut novel, The Long Road to Paris. This blog describes our own adventures and challenges. And now you can follow our Bahamas sailing adventure that provides the setting for our second novel, Night Watch. Our rally, the African Safari Challenge, crossed five countries in South Africa in May 2014 and in 2015 we participated in the second Trans-American rally this time from Nova Scotia to San Francisco. Spring of 2016 we travelled 28 days around Australia with friends from previous rallies and in the fall participated in our most exhausting rally through Argentina, Chili and Peru- the Rally of the Incas. We were awarded the Against All Odds award. We're still not sure if this was for us or our car. Stewball never broke down and we hardly did. We will soon take on Iceland as a self-drive tour and in the fall of 2017 we will participate in the Odyssey Italia and then back to Africa for a do-over (almost) of the Africa Safari Challenge.
View all posts by ejhowle23 →
This entry was posted in Antique car rally, international travel, Rally of the Incas and tagged Argentina, Chile, Llamas, Paso Jama, San Pedro de Atacama. Bookmark the permalink.