My first impressions of Iceland come from the trip from the airport to Reykjavik through jet-lagged eyes. Mostly this was rocky, rather barren land with the ocean in the distance. A 40 minute drive to our modern hotel which is reminiscent of hotels in northern Germany with its small, clean no-frills room.  Good fresh food, in the dining room.

A bit of history. Iceland was discovered by a Nordic Viking by the name of Arnarson in 871. Don’t think he found much here, but he established Reykjavik which means something like “Smoky Bay” based on the a false impression that turned out to be  steam rising from the hot springs.

Second bit of more modern history was the Hofdi House. This was  particularly interesting to us since our current writing is a novel set in 1952 Germany, in the early years of the Cold War. This  house was built in 1909 and was the meeting place between Reagan and Gorbachev in 1986 and marked the end of the Cold War.

We walked much of the city center. Had to photograph the iconic Hallgrimskirkja 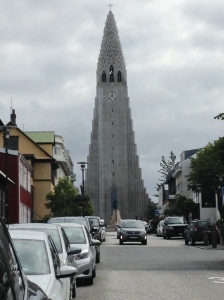 church which dominates this city. Not the most picturesque church I’ve seen, but impressive in its size and location.

Reykjavik is now a progressive, cosmopolitan city known for social tolerance, art and a little bit of everything in between. I couldn’t help but be impressed with the street art which includes many buildings. 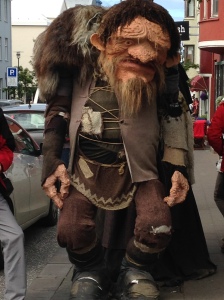 Much more to do and see here, but tomorrow we pick up our car and begin our drive around the Ring Road-Highway 1.

Authors and adventurers, participated in the World Race 2011, an automobile rally from New York to Paris, crossing three continents and 14,000 land miles. Following much the same route as the setting for our debut novel, The Long Road to Paris. This blog describes our own adventures and challenges. And now you can follow our Bahamas sailing adventure that provides the setting for our second novel, Night Watch. Our rally, the African Safari Challenge, crossed five countries in South Africa in May 2014 and in 2015 we participated in the second Trans-American rally this time from Nova Scotia to San Francisco. Spring of 2016 we travelled 28 days around Australia with friends from previous rallies and in the fall participated in our most exhausting rally through Argentina, Chili and Peru- the Rally of the Incas. We were awarded the Against All Odds award. We're still not sure if this was for us or our car. Stewball never broke down and we hardly did. We will soon take on Iceland as a self-drive tour and in the fall of 2017 we will participate in the Odyssey Italia and then back to Africa for a do-over (almost) of the Africa Safari Challenge.
View all posts by ejhowle23 →
This entry was posted in Iceland, international travel and tagged Hallgrimskirkja Church, Hofdi House, Iceland, Reykjavik, Ring Road. Bookmark the permalink.